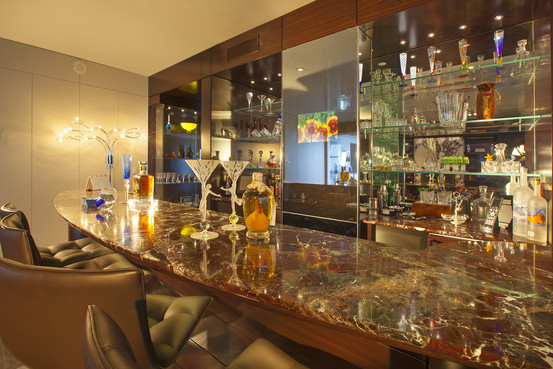 They conjure images of 1950s-era sitcoms, Formica countertops and basement rec rooms. Now, despite their image, wet bars are still managing a comeback into high-end homes.

While real-estate agents warn that the term “wet bar” won’t necessarily attract buyers, builders and designers say more homeowners aren’t only installing the feature, they are eschewing the basement in favor of first-floor prominence. The share of potential home buyers who say they must have a wet bar grows substantially as the home price increases: 30% of survey respondents consider it essential or desirable when spending between $250,000 and $499,999, while 42% do when the price hits $500,000 or more. Overall, the demand doubled to 4% between 2001 and 2012, according the National Association of Home Builders.

“We’re seeing a real trend,” says Mark Zilbert, chief executive of Miami Beach-based brokerage Zilbert International Realty. “This is the old fireplace where you gather around.”

Chip Swartz, president of Ohio Basements, based outside of Cleveland, says his business, despite its name, has evolved from remodeling basements to installing bars in recent years. He says half of his latest quotes have been for installing wet bars in great rooms and dining rooms.

The popularity of wet bars has waxed and waned. In the 1950s, the era of the three-martini lunch, liquor cabinets were big. Basement wet bars, which include a sink for cleaning glasses and adding water to drinks, were popular decades later, only to eventually become shunned by the health-conscious.

The new wet bar bears little resemblance to these forbears. Many use custom cabinetry to blend in with the rest of the house; some don’t display alcohol at all.

“Most of the bars I’m doing are sleek; they fit right into the room,” says Kim Coleman, owner of Kim Coleman Interiors based Palm Beach, Fla., who has designed and installed 10 bars over the past five years that range in price from $7,500 to $20,000. “They look like they’ve always been there.”

In the Chicago suburbs, interior designer Katie Belcher’s 10-by-9-foot cloak room in her 1898 Tudor home was turned into a traditional bar that recalls an English pub. Behind French doors are navy-blue raised cabinets; brass-lattice conceals glasses and a television. An antiqued-mirror backsplash adds to the look.

“Life is so chaotic and busy, we just thought having a quiet space where you can have intimate conversations… would be very useful,” says Ms. Belcher, who designed the bar with her brother Austin DePree, a founding partner with Northworks Architects + Planners in Chicago. She added that she wanted the bar to keep with the character of the old home: “The architecture sort of dictated how we designed it.”

While many wet-bar owners lean toward the discreet, there is also the 1,200-square-foot bar area in Jerry and Dana Carson’s 4,000-square-foot, $6 million penthouse in Sunny Isles Beach, Fla. Consuming a large chunk of the dining area, the ebony wood-and-marble-bar is 10 feet long and includes custom lighting, a display of antique and handblown glasses, and a mirror that conceals a television. “You can’t miss it,” Mr. Carson says. “Once you come in—boom, it’s there.”

Mr. Carson, who retired as chief financial officer of Playboy Enterprises in 1990, says he spent “a couple hundred thousand” dollars building the bar, which he regards as the centerpiece of his home.

“We find that this really is a better utilization of space,” says Mr. Carson, who notes his drink options for watching the Super Bowl include a bacon-infused vodka; Amarula, a cream liqueur from South Africa; and a $600 bottle of Johnnie Walker Scotch whisky. “We don’t use the dining room, but we do use the bar.”

Some people still want their bar to look like a bar. Scott Rechler, chief executive of RXR Realty, a commercial landlord based on Long Island, says his home bar, which flows into the library and opens to the patio, contains plenty of nods to his family’s history.

He has 50 corkscrews that his father began collecting from antique stores in England; they are displayed in an old shirtmaker’s case. Even older—and more sentimental—are two items from his great-grandfather: a liquor license from 1935 and a crate opener used in his Glen Cove liquor shop that closed in the 1950s.

Proponents say the bar is the next evolution of the open kitchen, which made the cooking process fun to watch. Now, as high-end cocktails become more popular, people want to create them in their home. “People are starting to appreciate the art of not only drinking, but creating and mixing craft cocktails as well,” says Mr. DePree, the architect and Ms. Belcher’s brother. They “want that similar elegant bar experience in their own home.”

Wet bars like these don’t come cheap. Mr. Swartz says his average project, which might include a medium-size bar area with seating for up to six, costs $7,600, though some homeowners spend far more.

Nathan Walldorf, a real-estate agent in Chattanooga, Tenn., says he doesn’t think home bars add a lot of value to listings. Buyers who don’t drink might even think about tearing the bar out. He would rather see someone spend the money on an outdoor kitchen, updating the kitchen or bathrooms or making the home energy efficient.

“You’re looking for that small percentage [of buyers] who really care about” a bar, he says. “I don’t know if a bar is always the most efficient use of space.”

John Bredemeyer, president of Realcorp, an appraisal business based in Omaha, says consumers should study the neighborhood before installing a bar. And given bars can be personal, homeowners should keep the space understated and not include any permanent sports team logos.

“When it’s extreme or it just sits in the middle of the room and doesn’t really fit, it can potentially decrease the value,” he says, adding that the bar should be easy to remove.

Ryann and Kevin Lyden have been trying to sell their six-bedroom with an in-law suite in Westchester County, N.Y, since they moved to Charleston, S.C. more than a year ago. While they spent more than $5,000 updating the English pine bar in the living room—tearing out mirrors and installing a custom-built wine cabinet—they’ve considered ripping the bar out to appeal to more buyers, particularly families with small children.

H. Juergen Hess, the couple’s agent with Houlihan Lawrence, urged them to keep it.

“Most bars are down in the basement, unused collecting dust,” he says. “I find the bar is a wonderful feature for this house. It makes it a little more interesting.”